You are using an out of date browser. It may not display this or other websites correctly.
You should upgrade or use an alternative browser.

This week’s update includes a few fixes for recent issues that popped, alongside some combat adjustments and fixes. Our development team is continually working on improving the New World experience, and they thank you all for your patience and reports that you continue to make on the official forums. 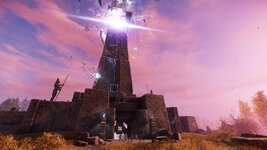 
Thanks for your support! We'll see you in Aeternum.