You are using an out of date browser. It may not display this or other websites correctly.
You should upgrade or use an alternative browser.

Can you actually believe it’s the 9th of December and this is the 9th Update for Elite Dangerous: Odyssey? Does anyone else have any connections to the number 9? Not like I’m trying to distract you or anything.

So!
Let’s get ready to usher in Update 9…
Elite Dangerous: Odyssey servers will be offline from approximately 09:00 UTC
Servers are expected to come back online, with the update available at around 12:00 UTC (long one, ah? Lot of meat in this...).

Time to glide our way through some factual information and the annotations of a woman existing solely off of double espressos, Barry’s Tea (sponsor me) and only ever good intentions. 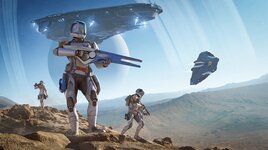 Introducing…The Scorpion.
The Scorpion, a new SRV designed specifically for supporting infantry on ground-based combat has rolled into action.

Mission Providers at Settlements.
Some NPCs at settlements might now occasionally have missions they can offer to passing Commanders!
If these mission providers become critically injured while a mission is active and the mission owning Commander is present at the location where the mission was provided, the mission will be considered failed.

Planets.
Major improvements have been made to light tinting from atmospheres. You will have seen some lovely examples of this in our latest update from Arthur here.


Module Management.
(Thought this worth popping up at the top here).
A fix has been implemented for pre-engineered modules from community goals not being marked informatively, as such.

Optimisation.
"Update 9 will see us go further, with optimisation already well underway for motion graph animation, mid-far distance planet rendering, lighting, scatter rocks, object physics, AI and character models – all of these, and many more, contributing to a better Odyssey experience for our players."
(Forgive me on this one for not deep diving into each point a little further for you. They’re quite tricky to word effectively and a whole day of trying to best explain would be needed from me at this point. You might like to read them for interest sake anyway, so here they are)

Stability
We’re actively continuing to help with tracking down as many continuing stability issues as possible, with your continued support in providing logs and reports where possible.

Phwoiiiiiiiiii (is the sound I made as I ended that one, so I'm putting that in here too...)
There's lots to digest and get your hands on here, Commanders. We've hopefully made a nice dent in tackling some of your more pressing issues present in Odyssey to help towards making good your experiences across the Galaxy following Update 9, but it's also time to get to grips with a new 'Toy' - The Scorpion - and those handy Limpets!

There's naturally a continued list of issues remaining which many of you look forward to having some attention.
If they're not listed as fixes here, we just need more time to focus down on them.

I'm just going to pull a few out of the air but do go easy on me with the "but you didn't mention this bug, is it going to be fixed?" pings.
I can entirely sympathise with you on how you'd like to see me list and confirm way more of these here for you, but unfortunately my brain can't keep up with responding to them all, but I am paying desperate attention on this side of the screen for you - promise.

Update 9:
Legacy Odyssey and Horizons:
And of course I'll direct you over to the Top Issues post as it stands at latest to remind you that those things all count still too Elite Dangerous Issue Report - 16/11/2021 - https://forums.frontier.co.uk/threads/elite-dangerous-issue-report-16-11-2021.593721/.

As always, Commanders, we appreciate you and your incredible passion for the game and improvements toward its development further.

Really hope Update 9 brings some fun and excitement ahead of the Holidays.
I know I'm buzzing to see how you're all going to be poking at it once it's taken hold of the Galaxy as we know it, so as usual I'll be on hand in here to see in the release and be ready for immediate impact.